skip to main | skip to sidebar

What a morning! As I was online  before my walk it kept getting darker outside not lighter – at 6:30-7:00am!! With the sky DARK gray I got ready to walk anyway.  Just as I was about to leave the sky opened with torrents of rain pouring down. I decided a later walk might work better. So, just about as I got all set up to begin my next project the sun came out – and off I went admiring the partial rainbow for its colorful streak across the still gray sky. 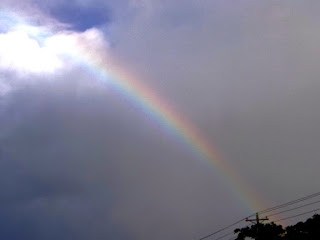 Most of the sky was still very dark but the sun is on the side the weather comes from and sure enough, after a bit the whole sky grew lighter and sunnier. Plovers were mere moving dots at the far end of their field so I went right to the beach.


Turtles began popping their head up almost immediately. Several times in a very smallish area so I set the camera on only a small amount of zoom and tried to hold it steady covering a fairly wide area of the sea in front of me.  A tripod might have been in order. I DO have a tripod and a monopod but I don’t find either helps much when I leave them at home!
So there I was - hoping - hoping - hoping.


When a head would pop up I’d click – no time to check to see if the camera was still pointed right or not. It’s almost like trying to catch a ‘Jack-in-the box’ as it pops up. On the tiny camera screen some shots seemed to have dark specks on them. Imagine my hopes when I got home and could see those shots on the computer screen.  Several of beautiful water only, but three – yes 3!!! – with a turtle head! 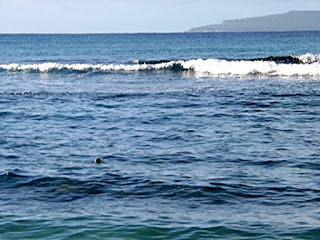 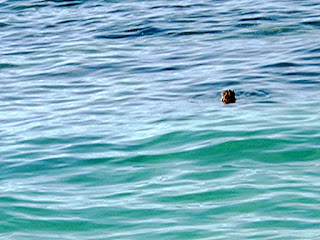 One with some of the shell even! And then to discover that picture has a second spot that is likely another turtle head barely breaking the water. WhooooHoooo!!!  Oh happy day! I may just start toting the tripod! 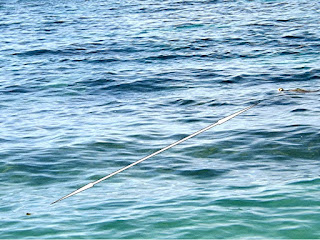 At the end of the beach there were tent tops and tables – the tables being decorated with local vegetation – so I gather there was a party there last night. 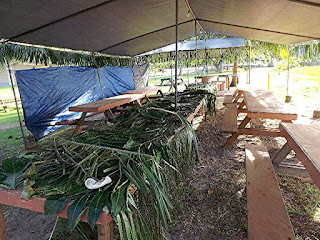 Onward to the fiesta grounds but nothing remarkable there. On the way back some Donne Salis (Micronesian Starlings) were doing a lot of flying and squawking and they even attacked and chased off some kingfishers I’d just photographed calmly sitting in a tree. I suspect the Salis have a nest they thought the Kingfishers were too close to. They can both be quite aggressive species. 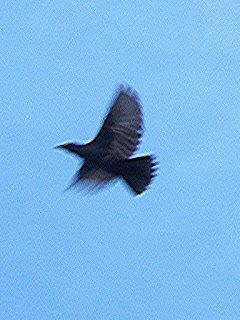 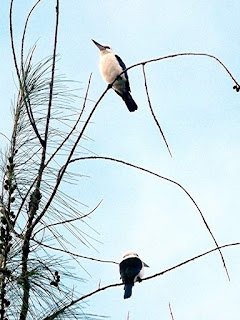 In this case it was ‘no contest’ – the Kingfishers made a hasty retreat – chased for quite a ways by the Salis. The tree the Salis then settled in is across the (narrow) beach road from where the Kingfishers had been ie: quite close. 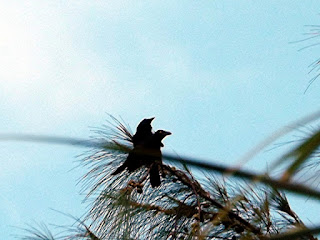 Continuing on toward home I paused for a hello to the Chinese guy who also walks along there most days. We both noticed the sky rapidly graying up again so we just exchanged a greeting and that brief weather comment as I kept on going.


A couple of Plovers were up in ‘my’ end of the field so I had to pause for a few snaps there. The one closest to me looks in one picture like it has just one foot. But shots of the same bird, before and after that one, clearly show two. 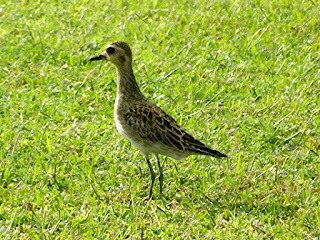 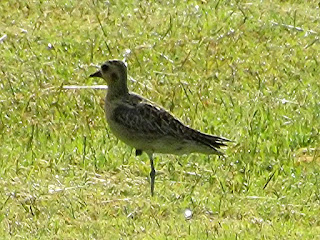 The Marianas Fruit Dove is a rare and endangered species among our local birds - so classified I guess because they only are found on a few of our Mariana Islands and only raise one chick at a time. They seem common enough here but are very shy - though their very distinctive call can often be heard they are less often seen. It is also our most colorful bird as adults – almost like a parrot. 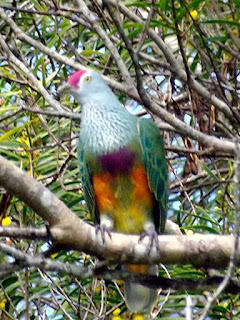 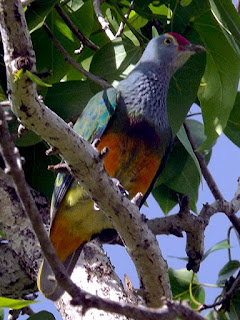 Several of us were at the Fiesta grounds back in early May. A friend and I were wandering around taking pictures and comparing notes. Others were talking on the bandstand. Suddenly I saw something not looking much like a blown leaf in one of the links of the chain link fence across the street and asked,
“What’s that in the fence?”
“I don’t know, could it be a leaf?”
As we approached we exclaimed - 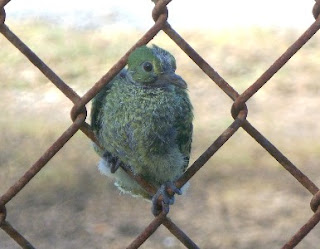 A chick of a rare and endangered species!
Where it was it was certainly in danger from dogs or cats. We snapped pictures, conferred with the others  Generally the parents will continue caring for a bird that has fallen or tried to fledge too early, so if it's in a safe spot it should be left alone. But we neither saw nor heard any adult Fruit Doves around and it sure wasn't safe there. We decided we needed to rescue it.
As we went closer it struggled to fly off but just couldn’t get airborne and landed on the ground – inside the locked fence. We convinced one of the males among us, a thin guy, to squeeze in through the small opening where the gate was loosely chained and fetch it. Though it kept scurrying along the ground he was able to get it, very gently and hand it out to us.

Another fellow with us had once raised birds so we entrusted it to his care until it was able to fend for itself. Once handed over, he was quickly able to calm and gentle it and we took more pictures. 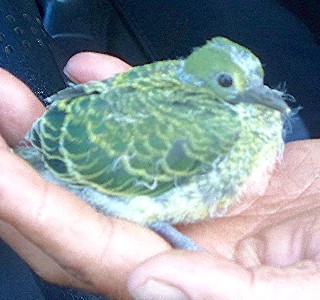 You can also see an adult Marianas Fruit Dove picture here and by clicking on – "listen to recording" – you can hear its distinctive call.
http://avibase.bsc-eoc.org/species.jsp?lang=EN&avibaseid=3D223FA4F6A26198
On a morning walk this week, when I got to the end of Kammer Beach I noticed some vehicles and guys at the edge of the fiesta grounds. Stevedores waiting for someone to come with a key to the gate in the same fence we’d found the baby bird in back in May. They were all staring and gesturing upward into a tree. Of course I HAD to saunter over and find out what a bunch of stevedores were so excited about. They’d spotted a baby bird! And yes it was a Marianas Fruit Dove! The Mom was hovering nearby and I saw her easily but had a tough time locating the chick. (We assume Mom though I believe both parents are involved in protecting the young. ) 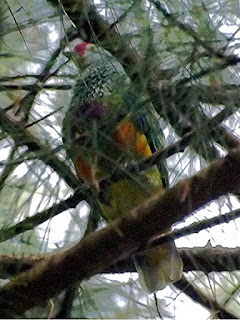 After the guys were off to their duties, the area was quieter. I waited a bit further into the fiesta grounds and the Mom joined her baby. That’s how I found the baby! Then I shot a bunch of pictures. A bird photographer’s dream! 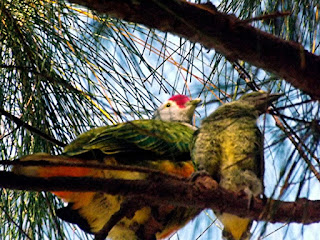 The next morning  they were still there. When the Mom would arrive or when she’d change position the little one would either walk to her or futter its wings and half fly – half stumble to her. 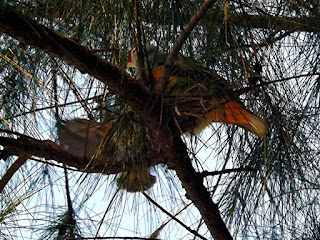 It definitely seemed to prefer life snuggled up to Mom. 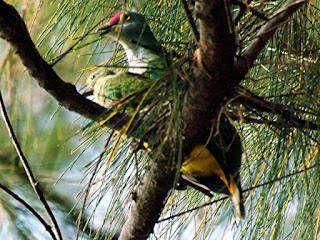 In the afternoon Mitch and I returned. The Mom bird put in only a short appearance.
This morning she didn’t appear at all and the chick looked very forlorn. Its feathers were fluffed out as it huddled without moving. 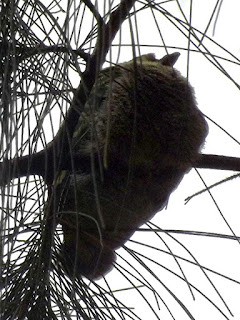 As I watched a Donne Sali flew into the tree. Then hopped branch to branch, closer and closer to the lone huddled chick with rapt attention. 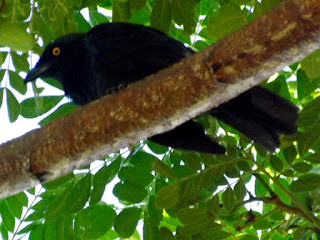 I assumed it was going to attack the chick. Sure enough, it suddenly zoomed in toward the chick but not AT it. Sali attacked a Kingfisher zooming in on the chick from the other side and chased it off. I was stunned. The Kingfisher noisily, retreated to some wires across the street, looking a bit dejected then. As I moved closer and closer taking its picture, it preened itself then flew off. 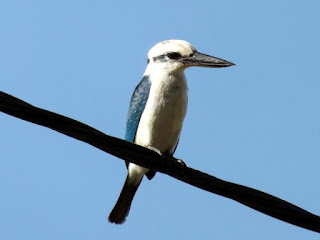 Then I noticed that whenever I stood under the chick not only were Donne Salis lurking about but terns singly or in small groups would hover all around and come quite close to me. I’ve never heard of one bird species protecting another species' lone chick but it sure seemed like it. 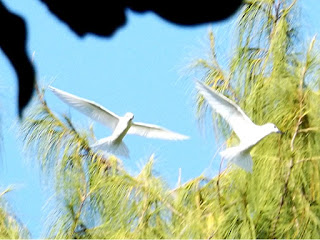 Later in the morning out running errands with a friend we swung by there and I was relieved to see them both Mom and babe snuggled up together again. 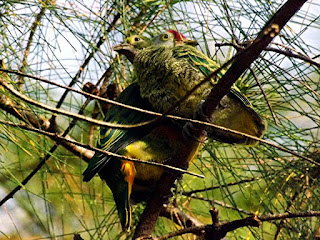 Posted by heyjude at 1:30 PM No comments: 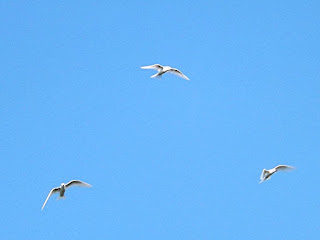 This morning began cloudy and pouring at walk time so I delayed until the sun began peeking through. Everything was still wet, shiny and glistening under the sun. No Plovers, in the first field I pass though a mother hen and chicks pecked away too far across that field to get photos worth mentioning.

Some crabs got my attention - one quiet large (body about ½ inch) one posed nicely in spots where its shadow gave me a point of focus. They are so nearly invisible when not scurrying from me! I got some decent shots of it. 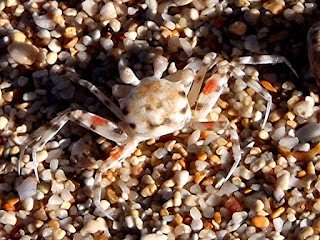 And a few minutes later a hermit crab crawling around carrying the shell it had appropriated for a home, made for some more Kodak moments. It also gave me ample opportunity to snap several shots. 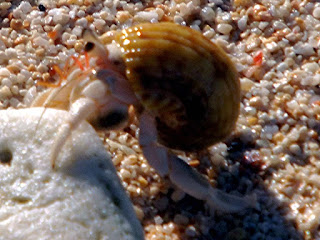 Also on the beach I was looking for a particular kind of coral for a project I have in mind so of course I saw none of it. I picked up plenty of other ‘treasures’ that look less like treasures back here than they had on the beach. How often I come in and examine may ‘haul’ wondering “Now why did I pick up that?!”  Today’s haul includes a great small piece of driftwood. I hope it looks as animal-like when it dries.


There was a nice, still somewhat blustery, breeze keeping me cool but not so strong as to be blowing me off balance. The sea tried that a couple times but I stayed upright. A good exercise in keeping balanced though. Nothing like the fear of the camera going swimming to motivate me.


On shore a bunch of terns were swooping and soaring but studiously avoiding giving me good shots! I swear they look down on “the human pointing the black thing” at them and immediately swoop for cover putting tree branches between them and me. Or make a sudden turn and double time it out of my camera range.

Coming home a few Plovers were in this end of the field and let me get as close as I dared without any sense of alarm. Watchful and slowly moving further down the field as I got closer but no alarm calls of “too-whet! too-whet!” and no flying off! Pleasing progress! 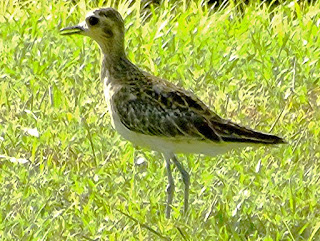 Back at my building, when leaving a brief chat with neighbors I heard a small sparrow calling attention to itself. It posed on the corner of the railing while I got off a nice shot. All in all a very nice morning.
Posted by heyjude at 6:46 AM No comments: